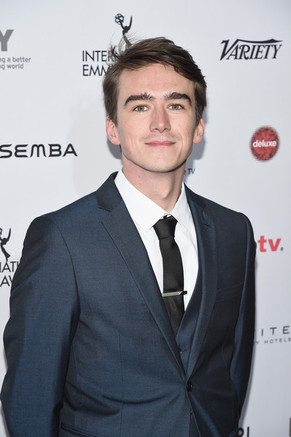 Gabriel Bergmoser is a Melbourne based author and playwright. After starting out in the youth theatre scene with his early plays Windmills, Life Without Me and Hometown, Gabriel completed his Masters of Screenwriting at the Victorian College of the Arts. He co-founded the independent production company Bitten By Productions, entering the Melbourne theatre scene with the one-act comedy Reunion and the futuristic Babylon Trilogy of noir thrillers. Gabriel's 2015 Beatles comedy We Can Work It Out opened to sell out shows and rave reviews – it has also been performed in Queensland and returned to Melbourne stages for the 2018 Fringe Festival.

In 2015 he won the prestigious Sir Peter Ustinov Television Scriptwriting Award for his pilot screenplay based on Windmills and was flown to the International Emmys in New York to accept. The same pilot was later nominated for the Monte Miller Award. In 2016 his first young adult novel, Boone Shepard, was published by Bell Frog Books; it was later shortlisted for the Readings Young Adult Prize the day after the sequel, Boone Shepard's American Adventure was released. The third book, Boone Shepard: The Silhouette and the Sacrifice, was released in 2018.

His 2016 plays The Lucas Conundrum, Regression and The Critic opened to excellent reviews while his early 2017 play Springsteen sold out its entire season. His play Heroes was nominated for the 2017 Kenneth Branagh Award for New Drama Writing and went on to win several awards, including five for Best Production and three for best script, on the 2017 VDL One Act Play Festival circuit. His first musical, Moonlite (featuring original songs by Dan Nixon) was performed as part of the 2018 Midsumma Festival; it received rave reviews, sold out its entire season, and was later selected for the highly sought after Home Grown Grassroots development initiative. His 2019 play, The Trial of Dorian Gray, sold out its entire season, was extended, then sold out again. Several of his plays have been published by Australian Plays.

In 2019 Gabriel signed a two book deal with Harper Collins, with the first, The Hunted, published in July 2020 and the second, The Inheritance, following in July 2021. The Hunted was published in the UK by Faber and to date has been translated into Greek, French, Italian, German, Bulgarian and Danish. The film adaptation is currently being developed in a joint production between Stampede Ventures and Vertigo Entertainment in Los Angeles, with Gabriel writing the screenplay. He has since signed a second two book deal with Harper for his YA coming of age novel The True Colour of a Little White Lie and a follow up - The True Colour of a Little White Lie is also currently in development as a feature film with Pirate Size Productions.

In 2021 Gabriel's first Audible Original, The Consequence, was released. His second, The Hitchhiker, was the first Original to be chosen for the monthly Editor's Extra promotion and subsequently spent the next four weeks at #1 in Australia.

Gabriel has worked in writer's rooms for Beyond Entertainment, Werner Film Productions, Pirate Size Productions and Balloon Tree Productions. In 2020 he wrote an episode of the pre-school ABC TV series Pencil Pals and created the web-series The Pact, which was produced entirely remotely during the COVID-19 lockdown.